a conference on the origins of the fashions

in France and Europe

Some courtesans who are made depilate until a third of head to look like the Queen Isabeau of Bavaria, the “elegants” which bleach their hair by using some decoctions composed of human urine to adapt to the fashion of Venetian blond which is famous under the Margot queen, some kings who powder their head with clouds of gold and an emperor called “the flowered beard” which never wore the beard and use of its power to kill all those who wore it, there are so many mysteries through history which show to the one can decode them, all the suffering that have been necessary to endure for the hairstyle, or rather because of the hairstyle!...

To pass on the wood-shed because of red-headed, red beards, green and blue greased with rancid butter proudly worn by hordes of barbarians, Messalina wearing wigs not to be recognized in the famous Roman orgies, Alexander the Great which launches the fashion of short hair and of shaved faces for its soldiers defeat their enemies, a “naughty horse fall” of Mademoiselle de Fontanges which will change the history of France, some pulley systems integrated into the wigs in order to be able to pass under the doors to the castle of Versailles, powdering with flour the famous “cache-crazy” in a period of scarcity that will start the French revolution, the human being did not have of cease since millennia to use the capillary artifices to come to its ends, whether they are political, poetic or romantic…

At all times the hairdressing has been the first pageantry used to be identified culturally, socially and symbolically, and still even today in our modern societies (or sometimes however preserved societies), the goal of this first asset of identification remained unchanged. A Buddhist monk, a punk, a Rasta or a sâdhu, a politician of right-hand side, left or extremist, a woman residing in the 16th district in Paris rather than in suburbs, until traces of doping in the sportsmen, everything can be detected in this astonishing living matter and sometimes mystical whom represents the hair and its use.

And even today, this original purpose of identification has remained unchanged and each hairstyle is the reflection of the person who wears it. Look around you, everyone is different, each hairstyle is unique and reflects the image of its “owner”!

Laurent Caille, Chief Hairdresser and Master Wig Maker for cinema, opera and entertainment for more than twenty years, takes you to discover behind the scenes the history of France and of Europe with a very new glance…

Resulting from many methodical historical researches this unique conference is also a collection of tender anecdotes, funny and crusty that will let you interrogative when you will look again in a mirror your own hair nature.

By having acquired in my career as Hairdresser Chief and Wig maker a great experience of history by working on many French and international historical movies (like "Marie-Antoinette" from Sofia Coppola) as well on many shows for opera, I have discover since a long time by looking at films of historical reconstitutions, whatever is their origin, they had so often so many anachronisms and so much aberrations due primarily to the lack of methodical and thorough research.

Thus I soon realized that the historical hair dresses and wigs were never corresponding to the reality of the specific periods and that there was always the same white wigs with always the same style regardless of the years, the centuries and the kings concerned, until obtaining sometimes some volumes ten times less important than in the reality! This is really shocking when it comes from historical reconstitutions that are made for inexperienced and neophytes public which will literally accept all information that are delivered to them.

It is inconceivable and unacceptable that some professionals can produce some such mock, in consideration also of the colossal budgets which represent this type of productions and especially in the respect of an ethics to the attention of spectators. Thus I decided to discover the truth about the fashions and their origins through the centuries and to restore the accuracy of styles in the reality.

So I have undertaken some research in 2003 with the help of many books of history of art in order to teach my knowledge to students and stakeholders in cinema and arts of fashion to enable them to carry out in the future a work of reconstitution impresses of much more exactitude. It led me quickly provide university conferences in France and abroad as well for some more general public, with the delight of the audiences to listen to me describe some crusty stories however veracious of these Great ladies and to look at me mimic some situations sometimes really comical.

I have therefore continued constantly my research on the different historical periods, because I was myself going from discovery to discovery in the reconstitution of the fashions and sometimes even in the etymology of some words of the French language… And thus to discover some truths that have never been revealed until now!

Thus I discovered among other things, with the help of historical paintings, that Joan of Arc has been painted with a “bowl haircut” only from the nineteenth century, the paintings of the fifteenth century all depicting her with long hair. And when the recent movie of Luc Besson is showing Milla Jovovich with short hair, what’s a mistake! Something is going wrong!

And what’s about Charlemagne called "the Emperor with the flowered beard", it will be only from the fourteenth century at the request of the “inquisitive Church ", while the ninth century paintings represent him well shaved or sometimes wearing some beautiful moustaches called “bacchantes”!

And concerning the "romanticism" which illustrates so well the art and the culture in the nineteenth century, it comes from a hair and dress fashion in the years 1800 based on the “Antique Rome”, which will result in the language and in the art on the ambience "romantic"…

And isn't Paris the international capital of the fashion since centuries and still today, but where does it come from?

Many are thus the events and the anecdotes which marked the French history and which created the fashions through the ages, it is what I propose you to discover in my thematic interventions:

International Conference for university, professional and private public given on the topic of " "History of Hair Dresses and Wigs through the Ages", the origins of the fashions in France and Europe.

It is approached as an introduction of this conference the topic of the job of Hairdresser Chief - Wig maker in the entertainment business, accompanied by various anecdotes through my professional career.

This intervention is designed with a slide show of paintings and photographs displayed on TV screen or monitors, as well as on giant screen using a projector or overhead projector.

You can visualize a summary of historical documentations of the conference directly on these pages of my web site:

or on this Photo slide show

In order to consult my professional path and my references I invite you to consult the following links on my website:

This conference is provided in English or French, with translators in other languages if necessary. This conference can be organized at any time at your convenience according to my availabilities and does not require however any particular preliminary preparation.

The duration of the conference is flexible according to the needs of each company and university, an average of 4 hours is however a base suggested for an optimal discovery.

Summarized versions of 2 or 3 hours to the attention of general public are however possible. Some alternatives versions for public of professionals are possible too including demonstrations of historical hairstyles and in order also to get a better attention of the public.

Some practice sessions for the participants can also be organized to measure at your convenience. A longer duration is also possible in a hairdressing training course of historical hairstyles of time (consult me).

Next date to come in Paris, done in French language. More informations on demande with Contact

Exemple of some last conferences :

Conference in Vancouver Canada on May 4th 2014

Thematic conferences for the diffusion of French culture.

This unique intervention is dedicated to make some public of professionals aware of the importance of precise period and of the rigour in the research to be applied while working on a historical reconstitution, whatever the time, but also to inform the broader and profane audiences of the secrecies and the mysteries which the French history conceals.

The concerned public can be a French or foreign community for purposes of general culture, but also an audience of professors and foreign students in various subjects as Hair, Make-up, Design, Fashion, Arts, History, History of art, languages, etc...

Possibly a sound system according to the size of the room.

To define for the lecturer. Provide a translator if necessary and the related wages. 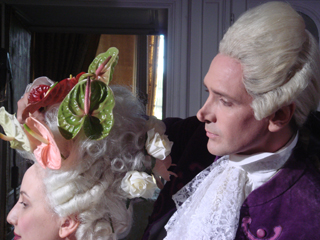 (Done in English with eventually a translator for other languages)

Duration: 3 to 4 hours (according to prior decision) (with a break)

1- Presentation of Laurent Caille and the way of a carrier in show business: (with a Photo slide show)

- Manager & Trainer for a big company of Hair Salon in France

- How to succeed in show business, the way of a carrier

- How to become Chief Hairdresser & Wigmaker for TV, Shows, Opera and for Cinema. Introducing jobs, actors and few stories…

2- Presentation of the job on a Movie:

Consistence of job and logistic: analysis of scenario and working plan, preparation of equipments and wigs, preview budget for stuff and teams needed. Being sure of all the fitting for the entire movie, and for everyday... Be aware of all the details…! Permanent attention!

- Preview of a working day on a movie: preparation of actors, working on set, psychology, cleaning and storing, changing place everyday...

- The difficulty of the job: timing, weather conditions, requirements, obligation of result, success..

3- Introduction on “History of Hair Dresses and Wigs trough the Ages”:

- Feedback on bad historical movies’ jobs: so many errors in the historical movies, because of lack of knowledge, or not enough research, it does decal styles and history, with sometime 10 or 20 years delay, until one century!…

4- Presentation of “History of Hairslyles and Wigs, from Egypt until Modern Life”: (with a Photo-Projection of historical painting and photos)

How did appear the fashions in the different societies and how it did change trough the ages. In Western Countries and especially in France, the main base of fashion in the world since hundreds years… Presentation with many fairy-tales and real small stories that are showing how the past civilisations did make change the fashion or create the fashions and styles trough the ages, for a long term.

5- Questions from the public and answers...

6- Optional: Demo of an Historic Period Hairdressing: (depending on the speed of the conference, the situation and according to prior decision)

(need normally more than 1 hour, but it can be possible to do eventually a nice and attractive demonstration quicker) Can not be done on each conference!

To consult the book of Laurent Caille:

"It is necessary to suffer to be beautiful"

(the origins of the fashions in France and Europe) 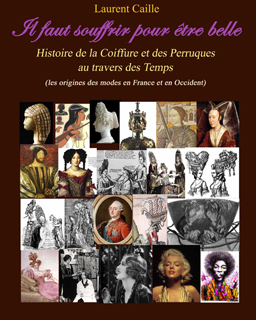 To watch the Photo Galery

To watch the Photo slide show

To watch the Video Clip